..or “Fear and Loathing” in Acapulco, with apologies to Jack Kerouac and Hunter S Thompson.

Checked into this massive sprawling city in the final week of February and settled at Casa de los Amigos, a Quaker run hostel (nice oats for breakfast) in the heart of Centro Historico. Hit the Zona Rosa nightlife district and discovered 3 things: 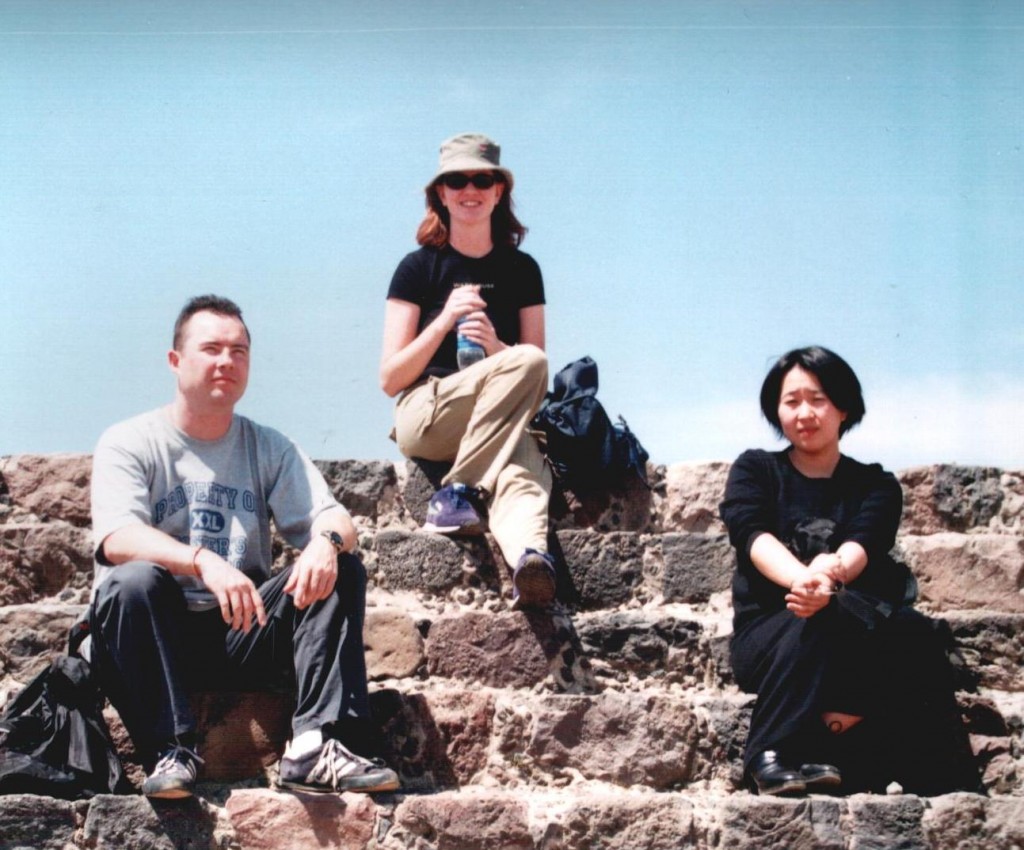 Met a whole bunch of nice people, namely Valerie (french), Noako (Japanese), and Lorretta (English). Casa de los Amigos quickly became a kind of Tower of Babel where everyone knew bits of one or two languages, but that’s all. Chris ended up learning more French than Spanish. 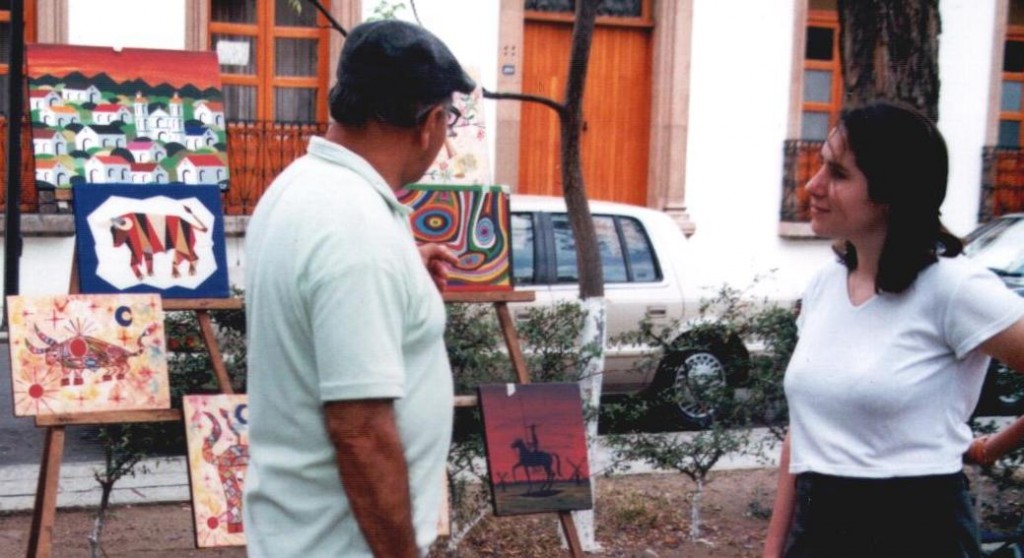 The City itself was not as expected – less pollution than reported and totally un-crowded (except on the metro which was packed), at least in the central areas. Locals were friendly and helpful. Two recommendations are – visit the Palazzo des Belles Artes – amazing sculpture and murals , and the Bosque de Chapeltulpec, a huge park where the City goes for fun on a Sunday afternoon. One hour outside of town is the ancient pyramids, with the mighty Sun and Moon pyramids built before the wheel was invented in the 6th century. Mexico City Zocalo (central plaza) had daily rallies and demonstrations calling for (real) democracy, in the approach to the election. 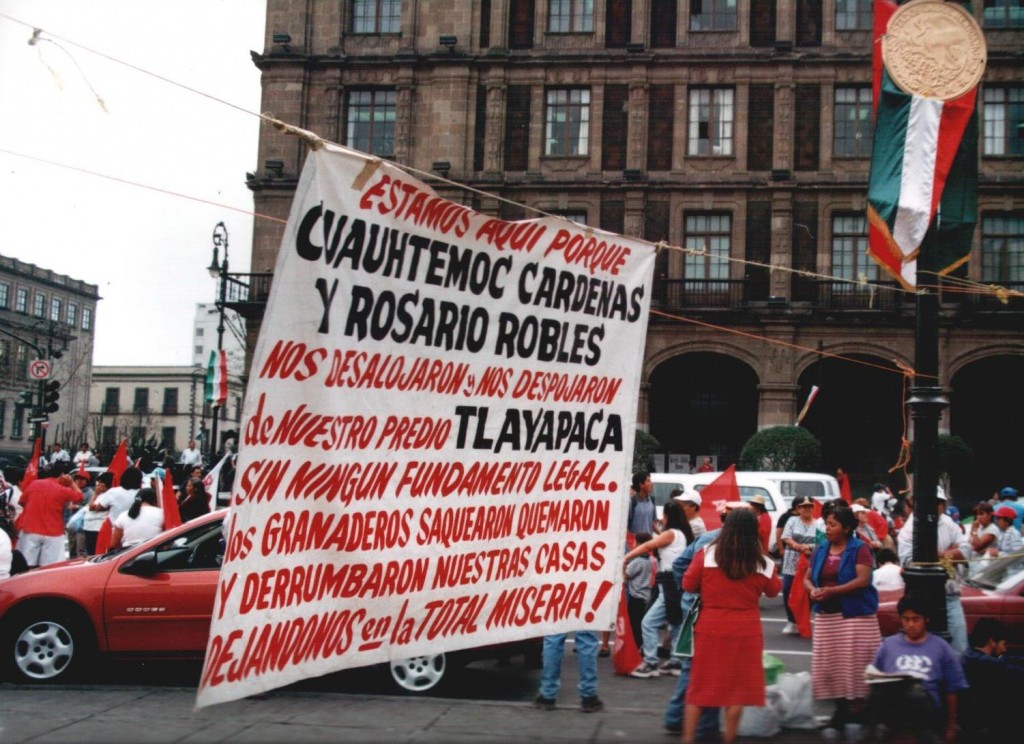 Still having trouble differentiating between enchiladas, tortillas, tacos, fajitas, burritos and quesidillas. All taste great. Tony reckons the’re the same, they just move the blobs around on the plate (green, brown, white), but they all taste the same when smothered in Jalepeno salsa. 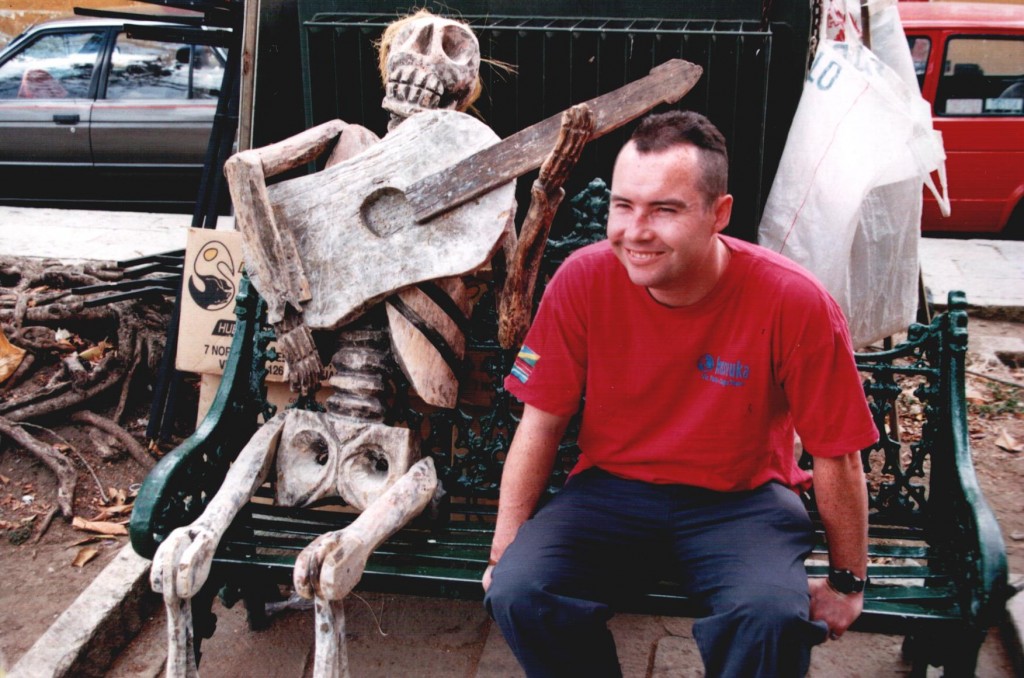 The night before leaving Mexico City a bunch of us came back from the Zona Rosa bars full of tequila and yards-of-ale to find our hostel manager passed out on the doorstep of the Casa, breathing erratically and dribbling a lot. Unlike a Quaker to be drunk, we thought, but fair enough. However he stopped breathing on two occasions which we shrewdly recognised as a bad sign. – Chris had to administer mouth-to-mouth and mouth-to-nose resuscitation while Tony fetched medical help (without the ability to speak Spanish or convince local security guards about the problem!). Carrying him to the surgery, he unhelpfully stopped breathing for the third time, but it was close enough for the medic to administer oxygen. Bit of a drama really. “Jesus” (his name), is alright now and has officially risen from the dead, which we felt lent a seasonal flavour to the episode.

(two weeks later we heard the Casa had been fire bombed and was closed down shortly after that. Perhaps the Quakers have a militant wing involved in narcotrafficing ?) 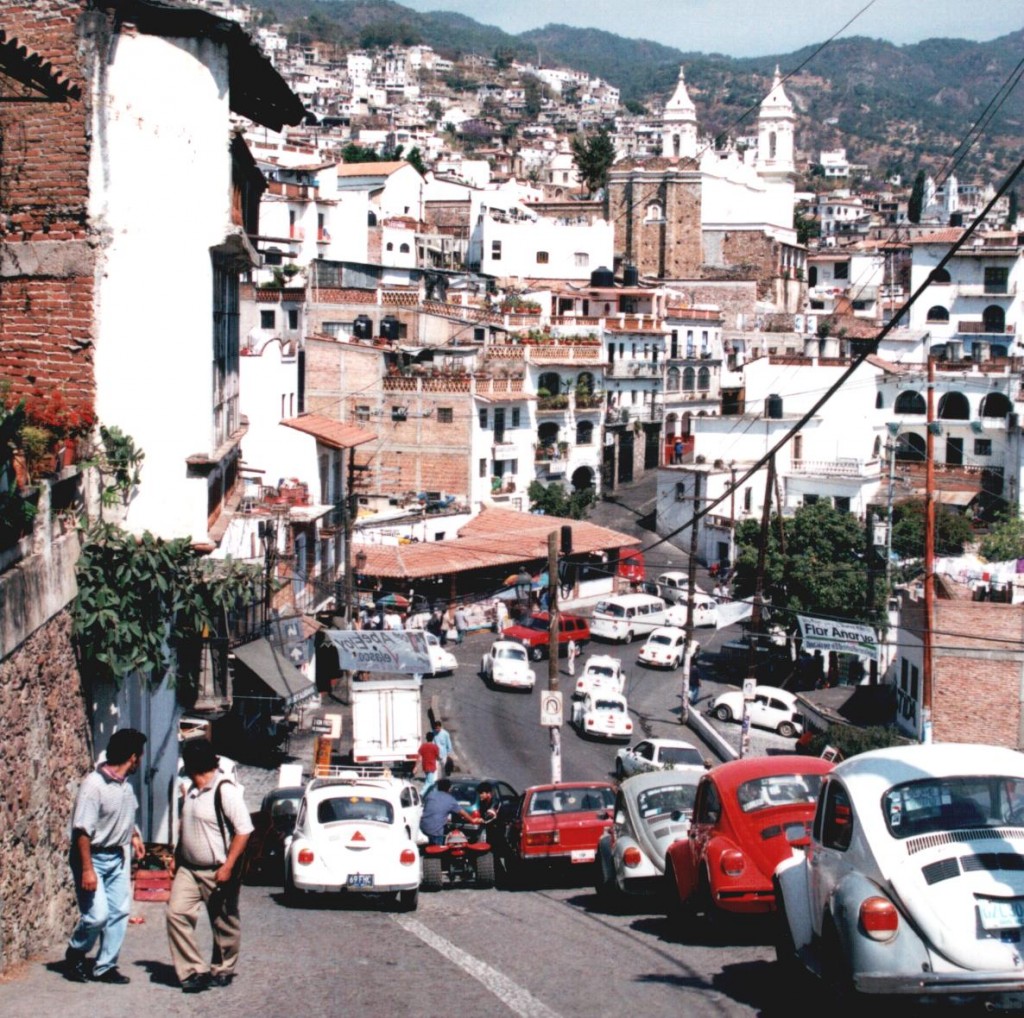 A pretty silver mining town in the hills to the SW of Mexico City. Bit of a holiday mecca for city folk and charming with its army of VW beetles trundling up and down the winding cobbled streets. Apart from an extraordinarily ornate baroque cathedral interior the top attraction was Las Grutas, enormous natural limestone caves cut into the hillside 30km away. About 3km long and 100m high within the humid caverns. Incomparable with anything we’ve seen before . Stayed at Hotel Casa Grande (big house!), with the worst bathroom in Mexico. Tony is now reading the Holy Bible. Wants to find out what all the fuss is about, and heard it’s a bestseller. Nothing to do with Jesus coming back from the dead the other day. He also bought a load of cheap silver rings to bribe chicks with. 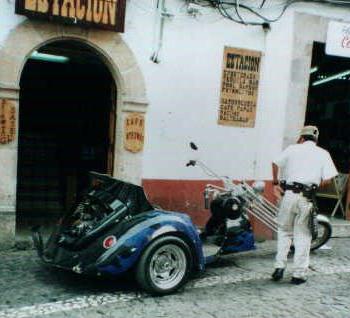 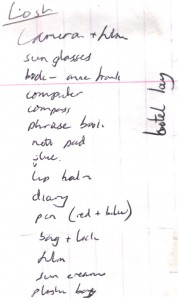 Time to go loco down in Acapulco. Kind of a seedy Mexican version of Blackpool, but no sticks of rock or candy-floss, just more tacos and tortillas and corona with lime stuck in the top. Acapulco is now more or less eclipsed by Cancun, but still attracts a fair number of Springbreakers from Minnesota, Idaho etc, adding an air of hedonistic sophistication to the place. The huge circular Bahia is 15 miles long, you can’t stroll it like Portballantrae. Only stayed a couple of nights, on the second we checked out the legendary Quelebradead (Quelebrada) divers who chuck themselves off a big rock into a narrow chasm on the sea. Nutters swan-diving from 33 metres – apparently Elvis did it in “Fun in Acapulco” after advisedly kissing the shrine to the Virgin Mary.

Finally taking a stroll on the last day towards Playa Caleta, two local gentlemen politely relieved us of some of our belongings, under considerable duress, I may add, and not really subject to meaningful negotiation, if you know what we mean. No real drama though. Tony lost his diary though and now will have to write a new improved version. 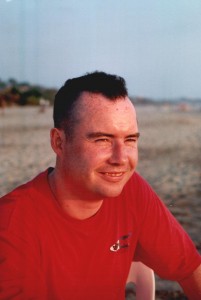 Lonely planet as usual out of date as our first choice recommended hostel across the road was completely demolished into rubble by Hurricane Pauline in 1997. Noted also that in two weeks of Mexico, Tony had been singularly unsuccessful in ordering soup in any restaurant, even if it was on the menu and everyone else was eating it. It took 7 or 8 attempts to be successful. Success came in PE when, in triumph, he was served a bowl of watery red liquid with a large fish plopped into it, with an eye hanging out. Revolting. At PE met Diane (Dublin) and a couple of chilled out Kiwi’s, just returned from the legendary travelers hang-out of Mazunte down the coast, when your daily budget is governed mainly by how much weed you can smoke. 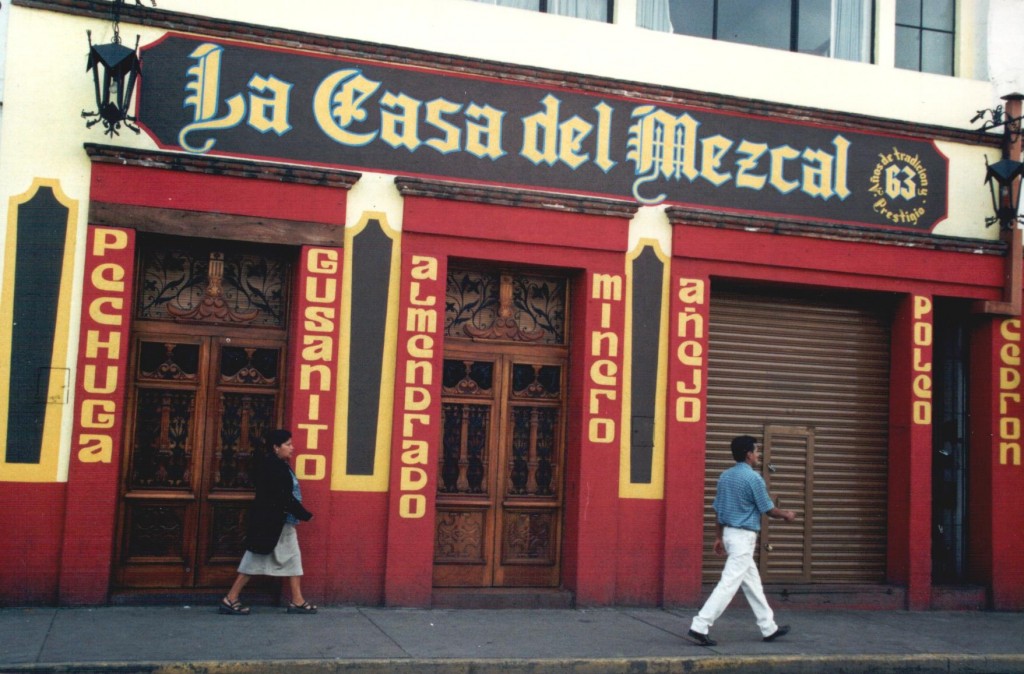 On to charming colonial Oaxaca. Lots of Spanish schools but we weren’t tempted. Valerie came down from Mexico City for the weekend to see us. Great to see her again. Hit the spirits at the famous Cantina de Mezcal and generally hung around around the park soaking up the atmosphere. Tried the local specialty of fried grasshoppers, Chapulines, Chris convinced it was some kind of joke food for tourists. Also met some of the most original beggars and performers ever. An odd looking guy in a bowler hat who plays a violin and makes a noise like a didgeridoo, a fellow who extorts money for his half-arsed poetry efforts, and best of all, an incoherent fool with a gun made out of egg boxes and squeezy bottles, who points it at you if he doesn’t get any money from you, and threatens to shoot. Scary people. 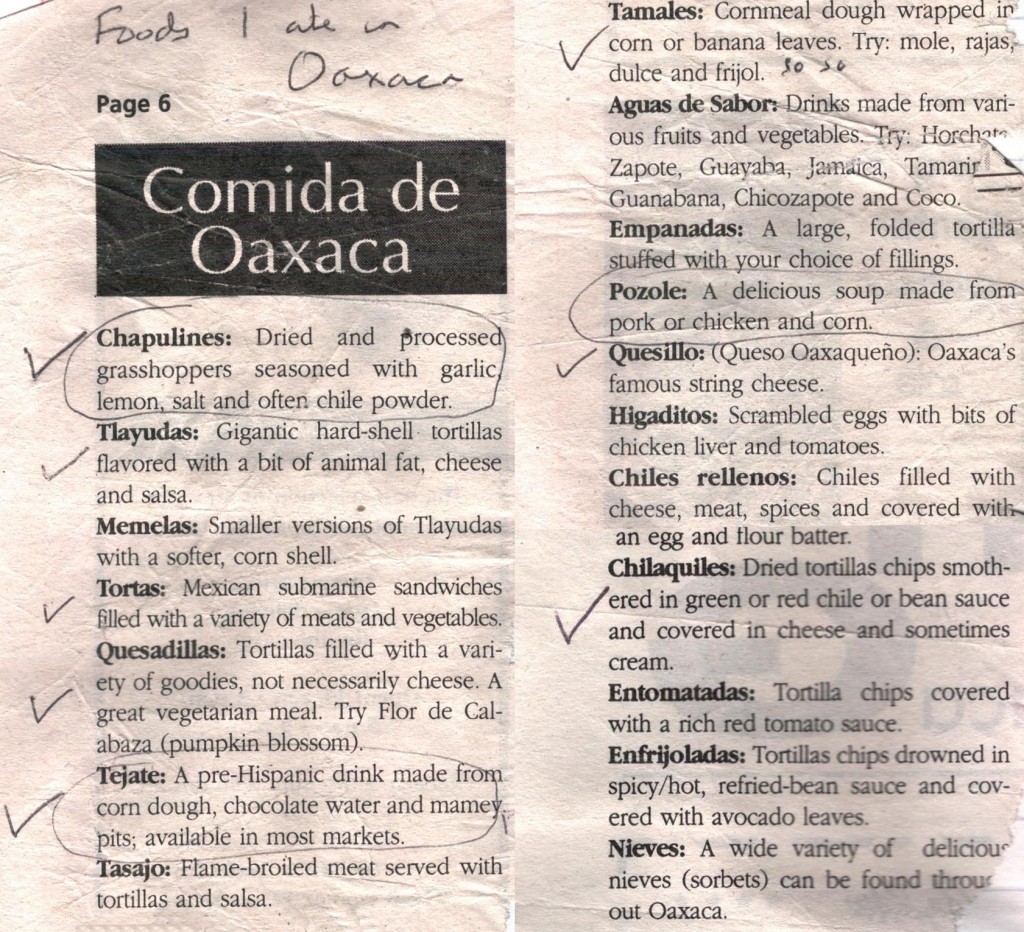 Beautiful Spanish town in the hills of Chiapas, surrounded by indeginious indian villages. Took mountain bikes to the hills, knackering at 2500m, where we met a friendly, but hairy pig. Visited the indian town of San Juan Chamula, with its unbelievable church a mixture of Catholicism and animism, people and candles and chickens everywhere. No one stands on ceremony here. Great artisan market with Guatemalan/Chipas tipico wares. 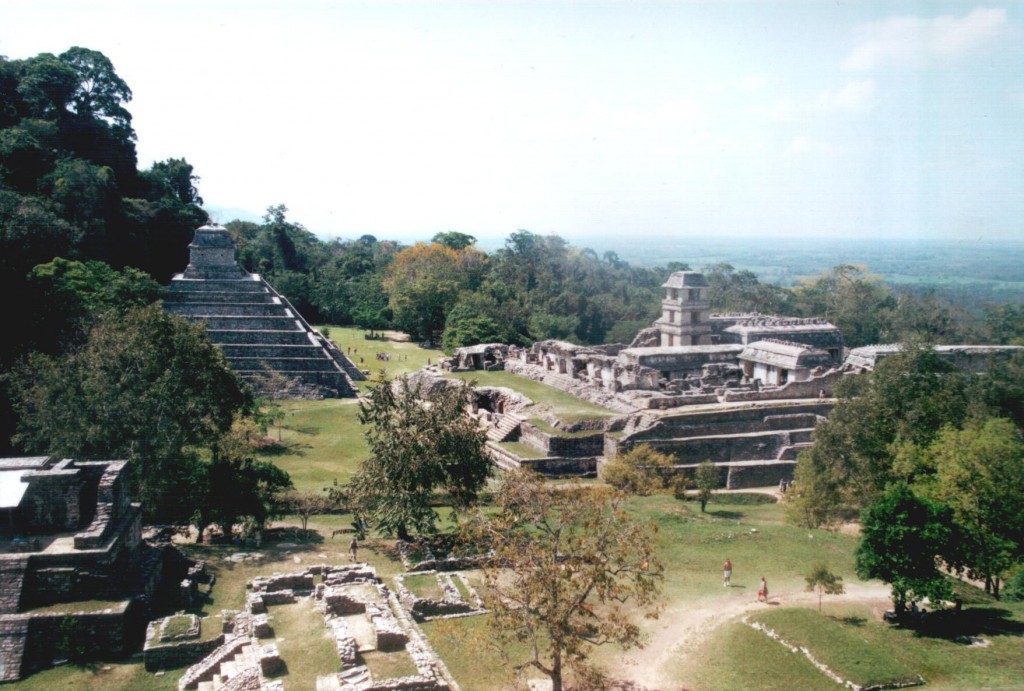 Fantastic Mayan ruins. Crappy, dusty and steaming hot town. Disgraceful hostel and owner which we had to share our room with, snoring and belching all night (very un-ladylike we thought). Ruins reminded Chris exactly of prehistoric world in Turok – Dinosaur Slayer on the N64. Town reminded Chris of lots of other crappy, dusty and steaming hot towns. Very nice side trip to Aqua Azul waterfalls.

Nothing much here at the capital of the Yucatan, but a nice hostel run by the amiable Raul. Tried the Merida tipico specialty Sopa de Limon. Yummy. 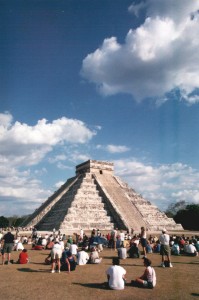 On the way to the beach, more spectacular ruins, viewed at the Spring Equinox. The biggest pyramid El Castillo, exhibited a curious snake like moving shadow image, apparently to appear by design on this day. Unfortunately hordes of noisy “septics” on day trips from Cancun helped to spoil the serenity and mystery of the place. B*****ds ! Can’t be helped.

To avoid the Spring Break madness at Cancun, we opted for Playa a little further south. Stayed at a groovy Posada with hammocks, pool and a cat called Pancho, run by Ismael and Tony. Still a fair amount of Spring Break madness at Playa though. First night slept mainly on the beach, due to drunken inability to gain access to the hotel. Propped up the bar at the Blue Parrot for the next week or so, and in our spare time did a bit of drift diving (no choice as the offshore current is strong), some excellent snorkeling from Coco Beach where Tony got frazzled. Did a lap of Cozumel Island on scooters. Chris, the presumably experienced motorcyclist crashed his, Tony didn’t. As the scooter was provided in such rough condition at the start, the owners were hard pushed to positively identify any specific damage, despite certain tell-tale signs like the large gash on Chris’s knee and broken indicator. Got off scot-free! Met lots of nice people here notably random girls at the Blue Parrot, two rich and boasting about it American stocks-traders (we laff now) and Stephi from Australia.

At this point I had to get a visa stamped in Australia, so Chris and I parted ways…

Time for a slight detour on the path to Central America via Australia.

First stopped of in Dallas (thanks Brian for the sofa) to catch up with cable TV, Movies, watch Brian play ice hockey and to watch my stocks plummet!

Stayed with Denver & Bill, (thanks for the air bed), inlined down long beach, hung around in cafe’s and bars and had a tea party. Basically took it easy. Oh, And watched my stocks drop some more.

Met up with Dick in his apartment right in the center of the fun district (Oxford St. & Liverpool St.) Had a few nights checking out the local bars then Dick went off for the Easter weekend. During the day checked out the touristy stuff, Opera House, Kings Cross, Oxford St., Sunset over the bridge. Also Hooked up with Xena and had a fun day on the beaches.

Then to catch up with Chris…. 30 hours of traveling to Cancun via LA and Miami so stop of in Playa again where I had a day on the beach with a nice girl from the Czech Republic (standard 5 minutes before she brought up the boyfriend) the rest of the day chatting with a New York girl who was subsidising rent by promoting the Hostel by the bus station and the night in the Blue Parrot. Found out Pancho the cat had died 🙁 but had been replaced by two kittens 🙂

Using an email from Chris as I had no guide book or maps I set of in his trail. Another 16 hour overnight trip on several chicken busses with no local money got me to…