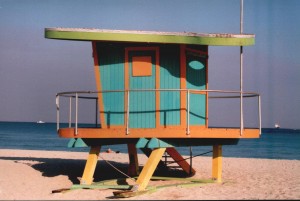 Like the end of “Midnight Cowboy”, with Jon Voight and Dustin Hoffman, but instead we took the plane – On down to sunny Miami Beach, nursing major hangover. 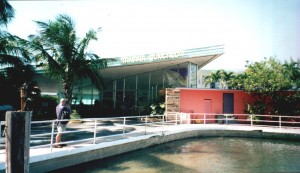 As all things in the US, Miami Beach is not just a little stretch of sand with a few donkeys and a stall selling ice-cream and “kiss me Quick” sun-hats, but an enormous neighbourhood of hotels, condos, Art Deco buildings, canals, marinas, and bays stretching about 20 miles. Bloody hell! We settled on groovy South Beach with all the (other) beautiful people. The place drowns in its own “fabulousness” and the movie industry was in town with the film festival. stayed in historic Clay Hotel (scene of Al Capones gambling syndicate), and then moved to Banana Bungalow – pool, bar, games, kayaks, all the stuff. Top stuff included canoeing the local canals, rollerblading on the beachfront, visit to a gun club to shoot 38 revolvers and 45s, watching filming of a pop video on the beach, and endless photo shoots up and down the streets. Also to fund the whole exercise, one morning we both made 1500 pound before breakfast by flogging internet shares – the rest of the day was spent gloating. Met some really nice folks at the hostel and of course had one or two beers. 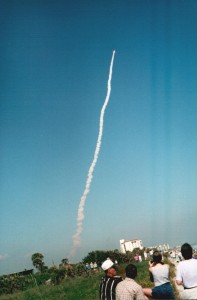 Next hired a car and headed up the east coast and then to Orlando. The hostel Chris stayed in before was apparently replaced by a coffee shop. Bugger! Big drunken night out at Church Street Station, and next day down to Cocoa beach, and at 12.40pm eastern time, witnessed the space shuttle Endeavor blasting off. Which was nice. A quick tour of Kennedy (big rockets and alligators) then down to Fort Lauderdale – famous for spring break fraternity parties. Big night at the pubs and clubs in the river walk area. (Tony didn’t get back till 11am, said something about “hot-tubs”). Also accepting that he may only be able to grow a ponytail from the back of his head, Tony let Chris shave his head into a mohican. Now looks a bit like a cross between Vanilla Ice and Travis Bickle from Taxi Driver “you lookin´at me”. Lots of jobs in FL for foreigners working on all the yachts and boats registered under foreign flags – all of them are actually, in order to exploit cheap labour. Next drove to Florida City (one street, NOT a city) stopping off at Palm Beach and the Police Museum in Miami – photos with Robocop, and sitting in Electric Chair. Quality entertainment. Florida city is on the edge of the Everglades, and we stayed in what amounted to a hippy commune. Drove and biked the Park, really beautiful, and Tony saw a panther or something. Went canoeing at dusk around the mangroves with a 12 pack of Bud, saw a manatee and chased a dolphin around the bay. Beery night out at the Last Chance Saloon – it really exists ! 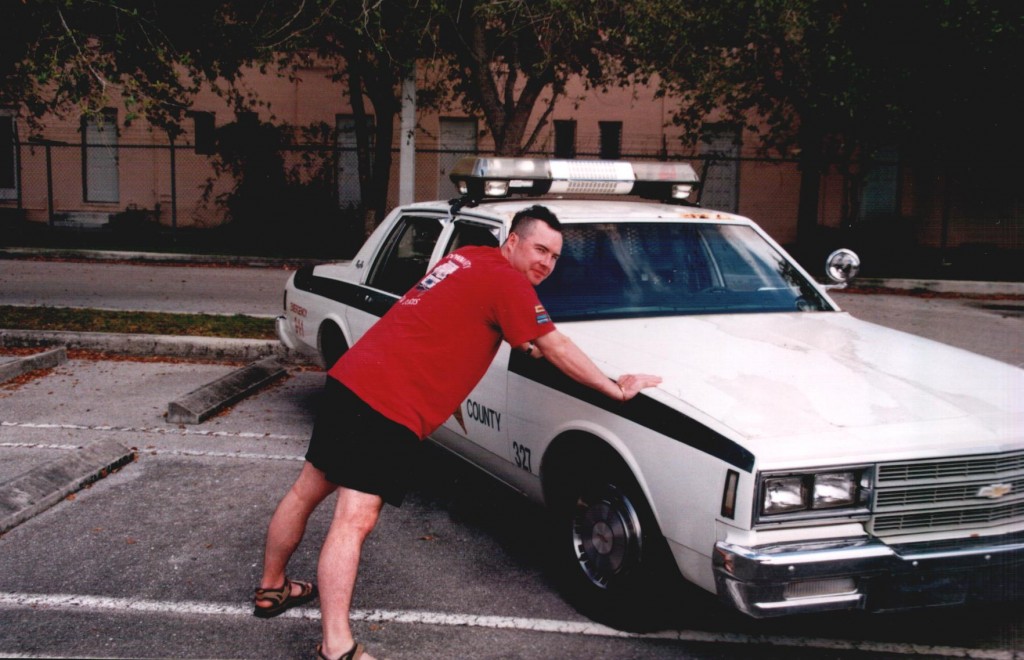 Then onto the Key Largo and finally Key West, a really pretty town and the southernmost part of the US. Tony did his open water diving course and Chris spoodled around diving, snorkeling and chilling out. Time now to brush up on our Spanish as next step is Mexico. Hola, arriba, gracias, etcetera.

(PS We have conceived a great new web-based idea which will make us both dot-com billionaires. It’s called wiblet.com. Chris is doing the business plan, and Tony the clever stuff. It’s a java-based personalised dynamic statistic banner generator tool. It might just work).